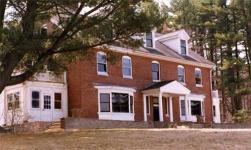 Belknap College was founded in 1963 by Dr. Royal M. Frye andVirginia M. Brigham. Their intention was to establish an alternative to the College of Advanced Science in Canaan, whereDr.Frye was employed, which at that time was said to be having management issues.  Dr. Edward Dane was the school’s largest benefactor.

The college offered a four-year program in the liberal arts.   Students took courses in the social sciences, humanities, and natural sciences.  A two-year associate degree was also offered.  The college had no professional or advanced programs, but a program in medical technology was offered to women students.  The science and mathematics faculty was the largest (13), followed by technical programs such as business admin & medical technology (8), English (4) history (3),  languages (3), other social sciences (2), and the arts and humanities (2).

Much of the Belknap College campus was on land and buildings that were part of the Dane Estate.  The Coe House in Center Harbor was the women’s dorm at Belknap College.  The Red Hill Inn was one of several buidlngs that served as men’s droms.  The Garnet Inn housed the campus dining hall.  The campus was spread out along nearly the entire length of route 25B.  The school found it necessary to operate a bus, which ran up and down that hill on an hourly basis so students could utilize the steep and lengthy campus.

Despite the good will behind its founding, the new college never found its legs financially.  It lacked older alumni who could support it. The absence of endowment income put pressure on trustees to cover budget gaps.  Also, Belknap never gained accreditation, which meant that its students could not obtain federal loans, enter graduate programs, or effectively compete for jobs.  The financial strains eventually forced the college to close its doors in 1974.

Although its history was short, the college is fondly remembered by its alumni. In 2013, they unveiled a memorial bench and plaque across the street from the site of Garnett Hall.  To commemorate the anniversary, the Center Historical Society will exhibit a display of college memorabilia.  For more information about Belknap College, visit the alumni website  or follow the discussion on the Winnipesaukee forum,  which links to articles in the Weirs Times on the founding and demise of the college.